“A new project”       2008
We are of the opinion that alpacas are more suited to an environment such as there exists in the Ceres / Wolseley region in the Western Cape –  alpacas originate from South America, the Altiplano region, with sparse vegetation, high altitudes and extreme weather conditions with snow fall in winter. It takes a male alpaca at least 2.5 years before it is ready to re-produce and then another 11.5 months gestation period to be able to judge his off-spring. As with most stud related farming, where one boards the livestock on foreign farms, it gets expensive to keep all males and so more than often we sell off our males once weaned, usually as herd guards for sheep or as pets. This leads to the loss of a potential herd sire that might actually be suited for breeding.

Our aim in research and development of the alpaca in South Africa is the improvement of the herd as well as the improvement of their very valuable fleece. We have learned, through other breeders in other, very extreme climatic areas in South Africa, that the fleece of the animals is much softer, longer and yields more in weight per animal than in milder climates. This will be our trial and error part of our envisioned long-term project.

Once a year, around September / October, alpacas are shorn for their fleece, the fleece remaining our property. As these are herd animals, they should always be placed at least as a pair. 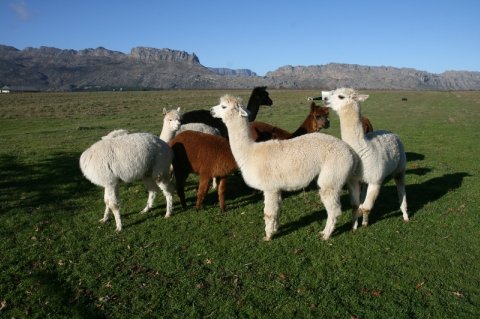 What do apples and alpacas have in common? – Quite a lot, we would say.

Since April 2009 a small group of alpacas has made their home in the Witzenberg Valley. This valley is part of Ceres, the enchanting, fruit growing town in the Western Cape of South Africa.

Finally our envisioned implementation of the Research and Development Project is coming to fruition. About two years ago we started looking for a suitable place to accommodate some of our animals to establish, if the harsh winter climate would improve their fleece with regard to density, fineness and length; and if the animals would benefit from a simpler, more South-American kind of climate and vegetation.

We’ve found a beautiful location on the farm ‘Doornkraal’. This well-known apple and pear producing farm is the first step in a hopefully successful venture to enhance our alpaca breed in South Africa. ‘Doornkraal’ not only grows fruit, but also keeps a 1000 head-strong sheep herd. The alpaca males, older than a year, will become sheep guards and learn the ropes within the next few months. Once the first group has adapted to their new ‘job’, they will be placed on a nearby farm located in the ‘Koue Bokkeveld’, which is part of the Karoo. There they will guard up to 2000 sheep by fending off predators, thus minimising the loss of new-born lambs.

The climate in Ceres is characterised by a major temperature variance between the summer maximums and the winter minimums. January and February are regarded as the hottest months of the year with an average maximum of 29,9°C measured during February whilst the average minimum of 2,4°C is measured during July. An average annual rainfall of 1088mm which occurs mainly during the winter months reaching a peak during July of approximately 200mm, snowfalls on the high mountain peaks is a common occurrence during winter and remain for up to 2 weeks at times. The Karoo is famous for it’s scorching hot summers and it’s arid vegetation; not unlike the Alti Plano from where the alpaca originates.