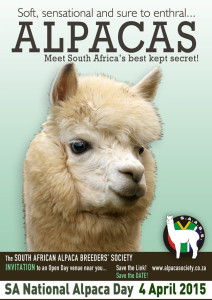 The MUKUTI Stud team will be at
Helderstroom Alpaca Farm outside Villiersdorp, Western Cape, on Saturday
SUNDAY, 5th APRIL 2015, due to a special request, we will be at Willowbrook Alpacas, Ohio Farm, Noordhoek, Western Cape.

Due to the Two Oceans race taking place in the Southern Suburbs of Cape Town, we managed to advertise Easter Sunday as National Alpaca Day at Lorna Ramsden’s Ohio Farm. Lorna was kind enough to invite us to participate and contribute, which we duly accepted. A sleepover and the promise of a good supper sealed the deal.
Sunday morning: we began by putting everything out – table and umbrellas, chairs and fences were already done the day before and alpacas were in their separate paddocks close by. We thought to take it easy and got ready for a quiet day …. ha! No chance. When the gates opened at 10:00 we could not believe our eyes. Within minutes there was hardly any parking space left in the front area. Younger people with their children had walked over from the Noordhoek Village … Manfred and Lorna handed out pamphlets. People, old and young, parents with kids, grannies and grandpas all got to hear about and experience alpacas in all forms and sizes. They were mesmerised by the lovely animals; the males strutted their stuff, as they were two paddocks apart from the young girls.
Once people came past the table on which garments, yarns, soaps and other items were displayed for sale, they were shown to the side paddock where Scharlie, Robert’s girl friend, very efficiently presented and talked about moms and cria – many spent a long time oohing and aahing about the oh so cute animals.
On the way out, many took the advantage to buy a bag or two of the alpaca poo for their gardens. At some stage Manfred had to load 10 bags at a time into people’s car boots.
We never expected so many people. The intention was to write down how many cars and people would come through the gates. There was hardly time to take a breather … we estimated that there were no less than 100 cars coming in during the day, most of them with at least three or four people … you make the sums.~ . ~ . ~

Natural MOTH REPELLENT:
This aromatic mixture is sure to keep those ‘wee beasties’ away from your precious wool:
Mix together: 18 drops CLOVES oil
16 drops CARAWAY oil
8grains CAMPHOR oil
One and a half cups of Spirits of Turps. Place the mixture on Cotton wool and keep with your fibres