S.A.A.B.S. STAND TAKES BEST IN SHOW!
15 to 17 October last week saw four alpaca breeders exhibiting at the Livestock Agri-Expo at Sandringham Farm, Stellenbosch in the Western Cape. Lorna Ramsden from Willowbr
ook Alpacas brought along three boys to the show – Baron, Leonardo and Casper who were greatly admired as they paraded at various times of the day, both in the main arena as well as the outside one. For the most part, along with other patient members of the livestock fraternity, they stood in their pen and received much adulation from passers-by, photographers, farmers, visitors, schoolchildren – you

name it, they were there.

Left to right – the winning team – Lorna Ramsden of Willowbrook Alpacas, Debbie Braunlich of Stonehill Originals, Alison Notley of Helderstroom Alpacas and Verena Hinsch of Mukuti Stud present their winning Trophies alongside (from back to front) Baron, Casper and Leonardo – part of the winning team Janina Bodington (below) of ChiChi Alpacas 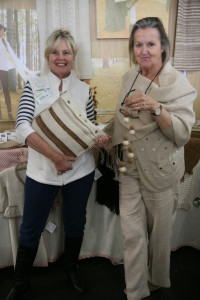 The mission statement of the Sandringham Livestock Agri-Expo is:-
“TO PRESENT AN EVENT OF EXTRAORDINARY QUALITY, SHOWMANSHIP AND ATTENTION TO DETAIL, AS AGRI-EXPO LIVESTOCK AT SANDRINGHAM IS REGARDED AS THE GOLD STANDARD OF THE LIVESTOCK INDUSTRY.”
What better platform for us to showcase our fledgling industry?
Under the SAABS banner our stand drew the crowds. From the three animals and bags of their shorn fibre visitors could watch as Verena Hinsch demonstrated hand spinning and, from there the yarn, the knitted, woven and felted products were exhibited as part of an eye-catching display to showcase the value chains.
Members of the public were fascinated by the “natural-ness” of alpaca. Alongside Willowbrook Alpacas, Mukuti Stud, Stonehill Originals, Helderstroom Alpacas, ChiChi Alpacas and Sally Weighill all offered for sale hand-worked products from our collections. Whilst we have seen better sales we were all in agreement that never have we had such good exposure for the alpaca.
There’s a word to describe utter disbelief, sheer amazement … but I cannot think of it right now. 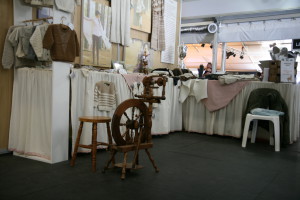 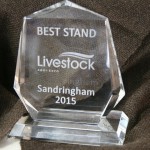 ine our delight when one of the panel of three judges tipped us the wink that we were the winning stand! In the main pavilion alone there were 80 stands. Outside there were probably double that number.

The silver “floating” trophy is retained by the Show. The glass one on the leftght is the one SAABS gets to keep! 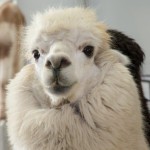